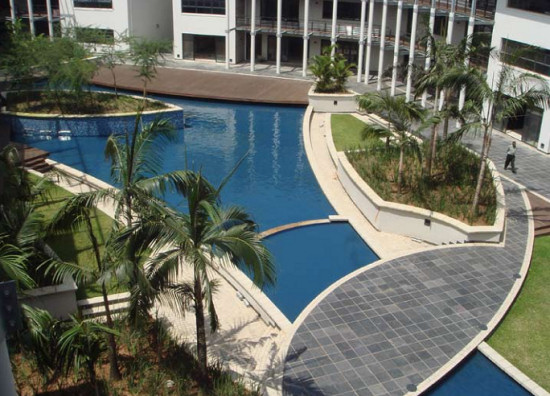 Island Office Park is situated in Riverhorse Valley Business Park, a light industrial and office park development in Durban, KZN. Landscape Architects Uys & White were approached by the architects, on behalf of the client, to look at the central courtyard and create a space which would draw office workers into it. The developer wanted the space to be inviting, with a large body of water as the main attraction. 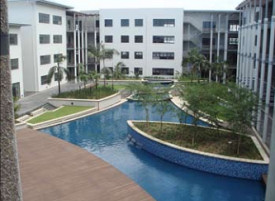 Landscape architect Bernice Rumble was tasked to create a modern oasis with calm, semi-reflective water and the water feature design is formed with gentle non-symmetrical arcs which has helped to make the courtyard look larger and has also softened the built elements. This articulation helped to create separate quiet, lawned and decked seating terraces that are not all visible from one place, but rather experienced as one walks through the courtyard. All accessible edges of the water feature have been designed for seating, allowing interaction with the water and garden.
The entire courtyard sits above a basement and Rumble worked with a fixed depth of 955mm. By playing with different heights of decking, lawn terraces, raised planters and creating a gentle tiered water feature, the confines of the built structure were disguised. The basement also ventilates into the courtyard and the edges were articulated around this.
Planting is simple specie massing with a combination of indigenous and sub-tropical plants. The oasis theme informed the use of palms and both Bamboo and Princess palms have been used. Strelitzia nicolai have been used to soften backdrops and introduce a large leaf foliage. Underplanting was a combination of Dietes grandiflora, Chlorophytum comosum and Ophiopogon jaburan. Bulbs and Kniphofia spp have been introduced into the planted island for subtle colour.

The water flow is over two gentle tiers which have been clad with granite and the central planted island in the water was raised as a focal point. This has been tiled with mosaic to introduce colour and texture. There are six rim flow spouts which pour from the planted island, acting as a visual backdrop and also assisting with water movement to ensure that a good water quality is maintained.
JKS Irrigation was responsible for the construction and mechanical workings of the water feature and its pump station has been housed within the basement car park. The feature is reticulated by means of two four pole, three phase pumps, the first of which is capable of delivering 45m3 per hour. It has a 160mm suction line and draws water from four man-made weirs housed underneath the decking area, returning to the top water feature tier through a 110mm pipe. From this top tier, water flows over a six metre curved granite lip, creating a clear sheet of water which has a calming effect. Water then flows underneath the walkway over a second six metre granite rim flow into the main pond. The second pump is capable of delivering 35m3 per hour and filters the water through two sand filters. This water is then returned to the main pond through six clear water sheets installed within the centre island feature.The pond has a volume of approximately 175 000 litres and water is cycled every two and a half hours. The fast rotation of the water in conjunction with the surface skimming weirs minimise any surface debris from settling on the pond floor. As the pond is only 300mm deep, the colour of the fibreglass was an important factor to create a feeling of depth.

This was carried out under the supervision of Basil Harrison of Real Landscapes, KZN, and work involved the landscaping of the large planters in the atrium. As the planters were on ground level with a parking garage below, there were certain challenges to be overcome:

Harrison says that the purpose of the landscaping was to fill the area with large, tropical plants which, together with the water feature, would soften the expanse of the surrounding building. Useable grass areas have been incorporated, allowing staff to sit and relax. Real Landscapes has an ongoing maintenance contract with the client.

This was also installed by JKS Irrigation and due to the proximity of the central garden, the following factors needed to be considered when designing the irrigation system:

JKS undertakes weekly maintenance to ensure that both the water feature and irrigation are working at optimum levels.

Rumble comments that this project proved the effectiveness and success that 3D graphics can bring to a project. At the early design concept stage, all final levels were calculated and this enabled an accurate 3D graphic to be generated. It was this graphic that assisted the client with visualising and finally approving the concept. “If one compares the initial 3D graphic to the final product there can be no doubt that the client’s end product was in line with the graphic. 3D has become a very powerful tool, especially when working accurately,” she says.

We use cookies to ensure that we give you the best experience on our website. If you continue to use this site we assume that you are ok with it.OkRead more